You are using an outdated browser. Please upgrade your browser to improve your experience and security.
Giovanni Boccaccio
Italian poet and scholar
Media
Print
Please select which sections you would like to print:
Thank you for your feedback

Italian poet and scholar
Written By:

Giovanni Boccaccio, (born 1313, Paris, Fr.—died Dec. 21, 1375, Certaldo, Tuscany [Italy]), Italian poet and scholar, best remembered as the author of the earthy tales in the Decameron. With Petrarch he laid the foundations for the humanism of the Renaissance and raised vernacular literature to the level and status of the classics of antiquity.

Boccaccio was the son of a Tuscan merchant, Boccaccio di Chellino (called Boccaccino), and a mother who was probably French. He passed his early childhood rather unhappily in Florence. His father had no sympathy for Boccaccio’s literary inclinations and sent him, not later than 1328, to Naples to learn business, probably in an office of the Bardi, who dominated the court of Naples by means of their loans. In this milieu Boccaccio experienced the aristocracy of the commercial world as well as all that survived of the splendours of courtly chivalry and feudalism. He also studied canon law and mixed with the learned men of the court and the friends and admirers of Petrarch, through whom he came to know the work of Petrarch himself.

These years in Naples, moreover, were the years of Boccaccio’s love for Fiammetta, whose person dominates all his literary activity up to the Decameron, in which there also appears a Fiammetta whose character somewhat resembles that of the Fiammetta of his earlier works. Attempts to use passages from Boccaccio’s writings to identify Fiammetta with a supposedly historical Maria, natural daughter of King Robert and wife of a count of Aquino, are untrustworthy—the more so since there is no documentary proof that this Maria ever existed.

It was probably in 1340 that Boccaccio was recalled to Florence by his father, involved in the bankruptcy of the Bardi. The sheltered period of his life thus came to an end, and thenceforward there were to be only difficulties and occasional periods of poverty. From Naples, however, the young Boccaccio brought with him a store of literary work already completed. La caccia di Diana (“Diana’s Hunt”), his earliest work, is a short poem, in terza rima (an iambic verse consisting of stanzas of three lines), of no great merit. Much more important are two works with themes derived from medieval romances: Il filocolo (c. 1336; “The Love Afflicted”), a prose work in five books on the loves and adventures of Florio and Biancofiore (Floire and Blanchefleur); and Il filostrato (c. 1338; “The Love Struck”), a short poem in ottava rima (a stanza form composed of eight 11-syllable lines) telling the story of Troilus and the faithless Criseida. The Teseida (probably begun in Naples and finished in Florence, 1340–41) is an ambitious epic of 12 cantos in ottava rima in which the wars of Theseus serve as a background for the love of two friends, Arcita and Palemone, for the same woman, Emilia; Arcita finally wins her in a tournament but dies immediately.

While the themes of chivalry and love in these works had long been familiar in courtly circles, Boccaccio enriched them with the fruits of his own acute observation of real life and sought to present them nobly and illustriously by a display of learning and rhetorical ornament, so as to make his Italian worthy of comparison with the monuments of Latin literature. It was Boccaccio, too, who raised to literary dignity ottava rima, the verse metre of the popular minstrels, which was eventually to become the characteristic vehicle for Italian verse. Boccaccio’s early works had an immediate effect outside Italy: Geoffrey Chaucer drew inspiration from Il filostrato for his own Troilus and Criseyde (as William Shakespeare was later to do for Troilus and Cressida) and from Boccaccio’s Teseida for his “Knight’s Tale” in The Canterbury Tales.

The 10 or 12 years following Boccaccio’s return to Florence are the period of his full maturity, culminating in the Decameron. From 1341 to 1345 he worked on Il ninfale d’Ameto (“Ameto’s Story of the Nymphs”), in prose and terza rima; L’amorosa visione (“The Amorous Vision”; 1342–43), a mediocre allegorical poem of 50 short cantos in terza rima; the prose Elegia di Madonna Fiammetta (1343–44); and the poem Il ninfale fiesolano (perhaps 1344–45; “Tale of the Fiesole Nymph”), in ottava rima, on the love of the shepherd Africo for the nymph Mensola.

Boccaccio, meanwhile, was trying continually to put his financial affairs in order, though he never succeeded in doing so. Little is known, however, of the detail of his life in the period following his return to Florence. He was at Ravenna between 1345 and 1346, at Forlì in 1347, in Florence during the ravages of the Black Death in 1348, and in Florence again in 1349. 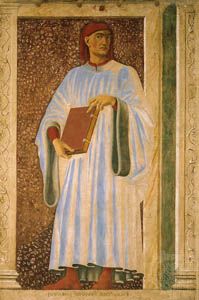